The Ancient Art of Double Cleansing 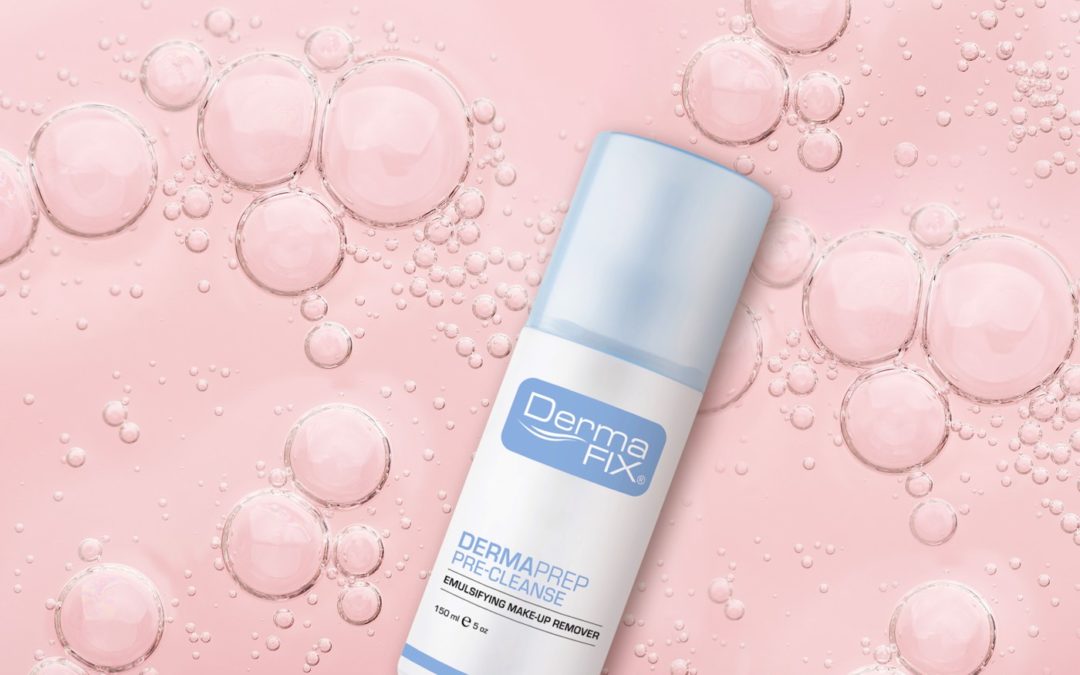 Way back in history, oils were always used to cleanse the skin. This is largely because oils dissolve other oils with ease, thereby helping to remove the oil-soluble impurities on our skin, including dirt, grime, and make-up.  The first known recipe for soap was found on ancient Babylonian clay containers dating back to 2800BC. This soap was made by combining oil with wood ash and water and became the cleansing method used by the ancient Greeks, Egyptians and Romans.

A double cleansing method for the face, originated in 14th Century Asia when the Koreans and Japanese had no other means to remove the white paint-like base that the ladies wore on their faces. Over the years the oil and double-cleansing methods have evolved to better suit our needs.

Oil cleansing is beneficial for all skin types. Most people will think that a pre-cleansing oil is something only used for dry skins, but this could not be further from the truth. Those with an oilier skin more prone to congestion and breakout may think the suggestion of cleansing with oil is absurd, but science doesn’t lie, and this is based on the theory of dissolving like with like. People with this skin type, having used a pre-cleanse oil have reported more suppleness to the skin, breakouts are less frequent and heal faster. This proves then that an oily skin benefits just as much as mature, dry, and sensitive skin types from use of an oil pre-cleanser.

Not all oils are created equal, however, and when looking for a pre-cleanse the key thing to take into account is the weight of the oil. Oils such as avocado and coconut are heavy and should be avoided, as the film they leave on the skin will potentially lead to breakouts. Argan and Safflower oils on the other hand are very light in texture and do not contribute to the formation of breakouts. As one of its main ingredients is Safflower Oil, the DermaFix DermaPrep Pre-Cleanse is the perfect addition to your cleansing routine. Safflower oil has a high level of linoleic acid and is excellent for helping to balance the sebum (oil) levels within the skin. The addition of hemp seed oil, an omega 6 fatty acid, acts as a powerful anti-inflammatory whilst encouraging skin growth and cell regeneration. This anti-inflammatory benefit of Hemp seed oil helps calm acne and some conditions such as eczema and psoriasis. Crambe (Abyssinica) Seed Oil, an omega 9 non-essential fatty acid, can rapidly penetrate the outer layers of the epidermis, allowing deep nourishment to the skin whist protecting against dehydration. This oil also mimics human sebum which in turn assists to control the overproduction of oil which can lead to acne. 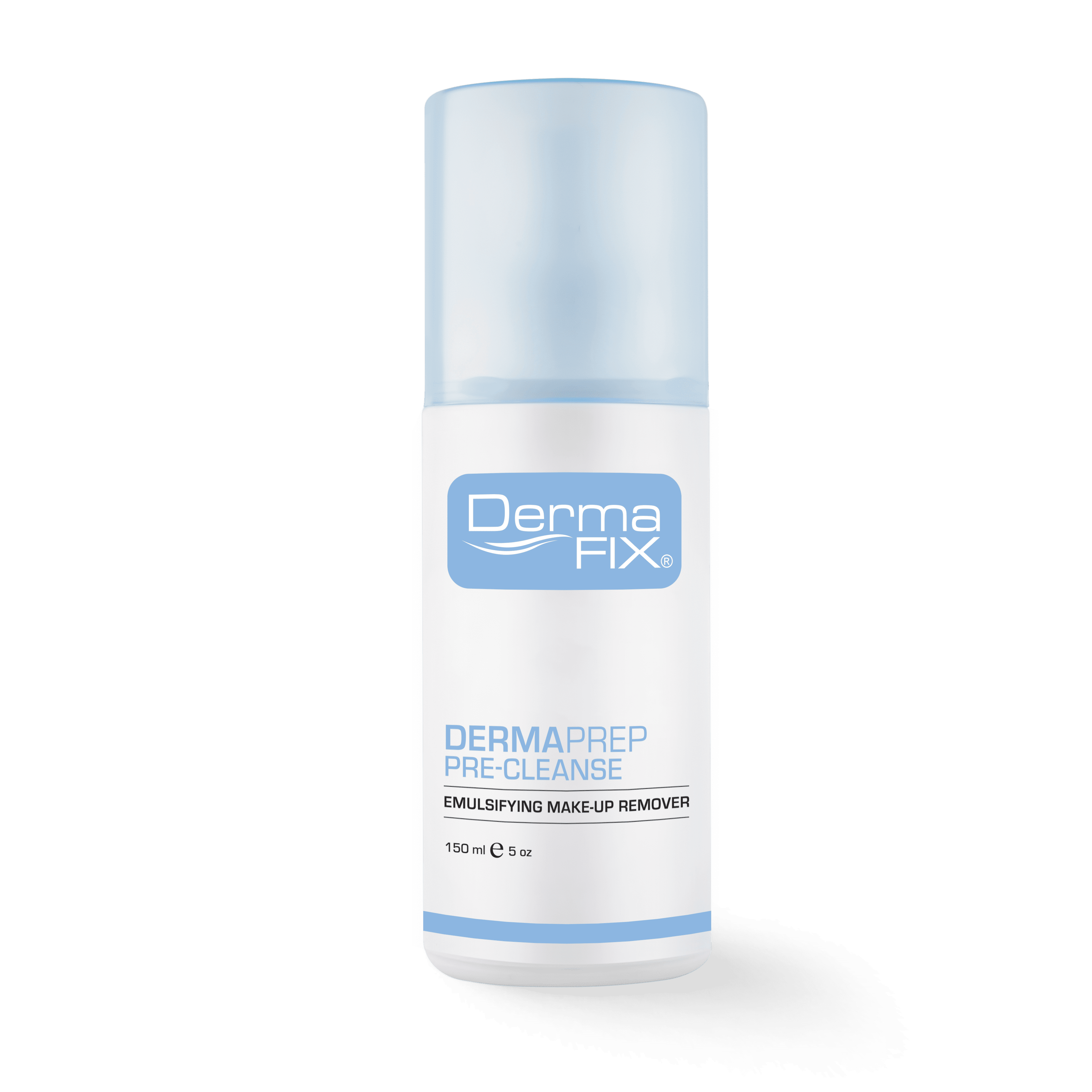 A deep cleansing water- and oil-soluble preparation for the effective emulsification of eye make-up and foundation. DermaPrep Pre-Cleanse easily and effectively removes surface impurities leaving no residue on the skin. Incorporate DermaPrep Pre-Cleanse into your cleansing routine, prior to using your DermaFix Cleanser and Toner of choice, ensuring superior penetration of active skin care products.

Pump out around 2 pumps of DermaFix DermaPrep into the palm of your hand.  Spread it between your palms, and apply to dry skin on the face, neck and Décolleté.  Do not add water at this stage.

Using light rotary movements with your fingertips, work the DermaFix DermaPrep over the skin for 1-2 minutes. This is when the oils get to work, dissolving daily dirt build-up and makeup whilst nourishing the skin with powerful plant nutrients.

Wet hands with warm water and continue to massage the face, adding more water as needed. The addition of water will make the oil turn milky-white as it emulsifiers.

Rinse the skin thoroughly with warm water to rinse away all oil-soluble impurities.

Pump a small amount of your favourite DermaFix cleanser into your hands (foam up if using a gel cleanser) and cleanse the skin, remove with warm water before continuing with serums and moisturisers.

For more information on the DermaFix Cosmeceutical Skin Care Cleansing Routine contact us directly on 0861 28 23 23 or visit our website www.dermafix.co.za

Benefits of using a targeted product for your neck and décolleté

The Science of Advanced Skin Care

Resolving skin care concerns related to the use of Cloth Masks

This website uses cookies to improve your experience while you navigate through the website. Out of these, the cookies that are categorized as necessary are stored on your browser as they are essential for the working of basic functionalities of the website. We also use third-party cookies that help us analyze and understand how you use this website. These cookies will be stored in your browser only with your consent. You also have the option to opt-out of these cookies. But opting out of some of these cookies may affect your browsing experience.
Necessary Always Enabled
Necessary cookies are absolutely essential for the website to function properly. These cookies ensure basic functionalities and security features of the website, anonymously.
Functional
Functional cookies help to perform certain functionalities like sharing the content of the website on social media platforms, collect feedbacks, and other third-party features.
Performance
Performance cookies are used to understand and analyze the key performance indexes of the website which helps in delivering a better user experience for the visitors.
Analytics
Analytical cookies are used to understand how visitors interact with the website. These cookies help provide information on metrics the number of visitors, bounce rate, traffic source, etc.
Advertisement
Advertisement cookies are used to provide visitors with relevant ads and marketing campaigns. These cookies track visitors across websites and collect information to provide customized ads.
Others
Other uncategorized cookies are those that are being analyzed and have not been classified into a category as yet.
SAVE & ACCEPT
Select your currency
ZARSouth African rand
USD United States (US) dollar
EUR Euro
GBP Pound sterling
AOA Angolan kwanza
NGN Nigerian naira
AUD Australian dollar
NZD New Zealand dollar
NAD Namibian dollar
JPY Japanese yen
AED United Arab Emirates dirham
BWP Botswana pula
CAD Canadian dollar
Create a new list